Sound Stage Studios is one of Music City’s most prestigious and historic recording facilities. Located in the heart of Music Row, it’s been the home to a who’s who of music since opening its doors over 40 years ago. With over 500 number one hits from names such as Johnny Cash, George Strait and Alan Jackson, the hits are still rolling out today.

Sound Stage Studios opened its doors in 1970. At the time, the building was owned by Mercury Records, and the studio space was called Mercury Custom Recording Studio.

In the early years of Mercury Custom Recording, artists such as Kris Kristofferson, Tom T. Hall, Faron Young and Jerry Lee Lewis recorded here with legendary producer Jerry Kennedy. Kennedy played a pivotal role in the studios early years and kept it booked nonstop for most of the 1970s.

As the 70s came to a close, ownership of the studio changed, as well as the producers who frequented the space. In 1982, Back Stage Studio was added onto the building. Although legendary producer Jimmy Bowen had been coming here for years, he didn’t move to Nashville until the early 1980s.

Bowen revolutionized the recording industry with the use of digital recording equipment. He moved in to Back Stage in 1983, and he began producing countless records for artists like Merle Haggard, Reba McEntire, Waylon Jennings, Hank Williams Jr., George Strait and Jimmy Buffett.

As the 80s came to a close, Ron Kerr, who had owned the building along with other investors, decided to buy out his partners and become the sole owner of Sound Stage Studios. Kerr remodeled the studios and constructed smaller mixing rooms which were more affordable and could keep up with the increased speed of production. The studios flourished throughout the 1990s with clients such as Patty Loveless, Shania Twain, Trisha Yearwood, Wynonna, and Peter Frampton.

Nashville’s music industry was not immune to the economic hardships of the new millennium. Sound Stage Studios adapted to the changes. In 2010, Terry and Kim Pegula purchased the studio to expand resources for their record label, Black River Entertainment, located next door to Sound Stage Studios. They invested in this historic property by remodeling the studios and offices. 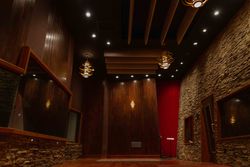 Ronnie’s Place Studio has been a mainstay in the Nashville Recording Community for over 50 years. The original facility was built in 1968. It was one of Nashville’s first purpose-built studios. Roy Orbison purchased the recording space in 1972 and named it “US Recorders.” The studio was then reconfigured to be a 24-track studio. Six years later, Ronnie Milsap bought the studio and changed its name to “Groundstar Laboratories.” After selling the studio in 1995, ownership changed hands many times. Even though the name of the studio changed, clients still referred to it as "Ronnie’s Place."

The current owners of this wonderfully historic facility, Black River Entertainment, received consent from Ronnie Milsap himself to have the recording space officially named “Ronnie’s Place.” They have also taken pride and gone to great lengths to preserve the unique atmosphere and vibe that has attracted producers, artists, musicians, and engineers to this facility for decades. The newly remodeled studio space is now available for clients to continue the tradition of recording excellence.